Back to the Women in Wind Blog

The energy transition must be gender-equitable

By Joyce Lee, originally posted on Foresight on 4 October 2019.

Gender diversity is not just a justice issue, but also necessary for successful companies. GWEC’s Joyce Lee explains why the energy transition will only be successful if women are able to fully participate.

In September 2019, the worldwide call for climate action spiked in volume. Millions of citizens poured onto the streets, participating in a Global Climate Strike for immediate government action on climate change.

A 1.5°C pathway demands a sweeping transformation of how we function as a society, an enormous step-change in investment in the global energy system, a dramatic decline in reliance on fossil fuels and, at the same time, a collective effort to accelerate the growth of renewable energy.

In short, the energy transition requires every resource we have.

Given the tremendous task ahead, there is one simple reason why the energy transition must be gender-equitable: because it is the only way.

All hands on deck

We are now on the tail end of the warmest five-year period ever recorded. Other bleak alarm bells include a rise in sea levels and acidity, new highs in greenhouse gases and a rapidly depleting global carbon budget. Greater international collaboration, innovative thinking and impactful policy design is in dire need, but progress on all fronts will be slower without increasing women’s participation in renewable energy.

There are strong evidence-based imperatives for empowering women in energy at all levels, from government to the boardroom to the household. One study found that parliaments with a higher proportion of women are more likely to ratify environmental protection treaties. Further studies from the United Nations Development Programme and the World Bank show that implementing climate investment initiatives that address gender issues increases their probability of success.

Bread, roses and clean energy for all

Just over one century ago, female campaigners in the US were chanting for bread (wage security) and roses (dignities of life) for all.

Today, women are still demanding their right to an equal wage. In the UK, mandated reporting shows that men are paid an average of 14% more than women in the electricity sector. The gender pay gap among the six largest British power companies ranges from 17% to a whopping 50%. Disconcertingly, these gaps grew in favour of men in 2018.

This century, the meaning of security has extended to protection from climate change. Women are more vulnerable to the climate-related risks of natural disasters, poverty, extreme heatwaves and drought.

As of 2019, nearly 40% of the world’s girls and women lived in countries failing on gender equality; no country — not even in the Nordics — has reached the “last mile” to close the gender gap. And in the words of Mafalda Duerte, head of the $8.3 billion Climate Investment Fund: “Gender inequality in times of climate change is a matter of life and death.”

Now let’s talk about the roses.

Hierarchies of power and gender norms are enormously influential in determining energy access. In developing countries, women are often the primary energy managers in the household, yet are blocked from enjoying the dividends of the energy transition due to a lack of access to land ownership, credit, social capital and education. A UN report from 2018 found that sustainable, modern energy infrastructure and technology tends to reach women last.

In a world with bread and roses for all, women must be active in the energy transition as investors, producers and consumers.

It is not only a sense of justice that supports gender diversity. For companies, it is a sense of survival. As Isabelle Kocher, CEO of Engie, says: “In a rapidly changing world, the more companies look like the societies they intend to serve, the better their choices and decision-making”.

Yet in the private sector, the presence of women at senior decision-making levels falls short. A landmark 2019 report on gender and renewable energy from the International Renewable Energy Agency found that men comprise three-quarters of the board at half of the nearly 1500 companies surveyed.

The traditional pyramid model is prone to zero-sum thinking when it comes to diversity. A “women gain and men lose” approach breeds tokenism and toxic environments. It needs to be countered by the overarching message that diversity makes commercial sense, drives innovation and accelerates growth.

Instead of relegating diversity as an agenda point under human resources, it should be mainstreamed as a cross-cutting priority across departments, from commercial strategy to business development to corporate and social responsibility.

It might seem facetious to address corporate culture, but every drop of talent and thinking will matter in this transition. On top of gender-inclusive policies which allow for work-life flexibility, there are many signals companies can send to emphasise inclusion: in-house mentorship and training programmes; championing female speakers for external engagements; conflict mediation channels; and more.

While there is no one-size-fits-all model for inclusivity, the essential components include senior-level buy-in, open environments and a willingness to challenge accepted norms.

Participants in the Women in Wind Global Leadership Program, co-organised by GWEC and the Global Women’s Network for the Energy Transition, come from 18 emerging wind markets. From Argentina to Vietnam, headquarters to branch office, we have observed marked differences in pay gaps, support systems, gender norms and other barriers when it comes to women working in the wind sector around the world. That means international and industry-wide efforts are needed to advance the role of women as agents of change in our global energy system.

Policy makers must embrace the value of equal participation in the fight against climate change and mandate equal pay for equal work.

Companies must deploy targeted recruitment and training programmes to nurture the next generation of stewards of sustainable businesses and climate-resilient societies.

Ultimately, women must be valued as contributors to innovation and collaborators in the energy transition.

It is the only way.

The traditional corporate pyramid model is prone to zero-sum thinking when it comes to diversity. A “women gain and men lose” approach breeds tokenism and toxic environments. It needs to be countered by the overarching message that diversity makes commercial sense, drives innovation and accelerates growth. 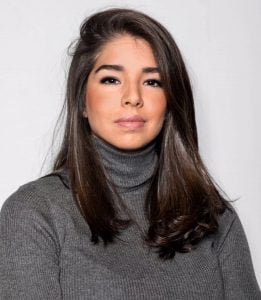 Meet Aura Andreina Andueza Peña, one of the Participants of our Women in Wind Global Leadership Program 2020.

Meet Kasia Lindegaard, one of the Mentors of our Women in Wind Global Leadership Program 2020.

On 25 June 2020, Women in Wind held its second knowledge-transfer webinar of the year on project financing and risk management.

Stay up-to-date on all news about the Women in Wind Global Leadership Program and more.
Click Here