2017 was a spectacular year for the offshore wind sector: the cratering prices with first zero bids for offshore in Germany; and a full ‘zero subsidy’ tender in the Netherlands; larger and larger turbines whose size boggles the mind; a plan for building an offshore wind island with more than twice today’s total installed offshore wind power in Europe; and the number of markets expanding rapdily – including newcomers from Australia, Brazil and Turkey. The rapid maturing of the technology has meant that offshore wind is taking shape as a mainstream energy source.

A historical record of 4,331 MW of new offshore wind power was installed across nine markets globally in 2017. This represents an increase of 95% on the 2016 market. Overall, there are now 18,814MW of installed offshore wind capacity in 17 markets around the world.

At the end of 2017, nearly 84% (15,780MW) of all offshore installations were located in the waters off the coast of eleven European countries. The remaining 16% is located largely in China, followed by Vietnam, Japan, South Korea, the United States and Taiwan.

The UK is the world’s largest offshore wind market and accounts for just over 36% of installed capacity, followed by Germany in the second spot with 28.5%. China comes third in the global offshore rankings with just under 15%. Denmark now accounts for 6.8%, the Netherlands 5.9%, Belgium 4.7% and Sweden 1.1%. Other markets including Vietnam, Finland, Japan, South Korea, the US, Ireland, Taiwan, Spain, Norway and France make up the balance of the market.

The spread of the offshore industry beyond its northern European home to North America, East Asia, India and elsewhere has begun. The first US offshore wind farm came online in 2016, China’s offshore wind industry has finally taken off, and Taiwan has an ambitious programme lined up. The number of countries planning pilot projects or full-scale development of commercial-scale offshore wind farms is rapidly growing; the latest newcomers wanting to enter the sector are in Australia, Brazil and Turkey.

Meanwhile, offshore wind had its first ‘subsidy-free’ bids for offshore projects in Germany and an entire subsidy free tender in the Netherlands, with winners of new offshore capacity receiving no more than the wholesale price of electricity. Overall, offshore prices for projects to be completed in the next 5 years or so are half of what they were for the last five years; and this trend is likely to continue.

The reasons for this are many: the maturing of the industry, the improvement and maturation of the technology and management thereof, growing investor confidence, and the introduction and deployment of a new generation of turbines, with enormous swept area and tremendous output. 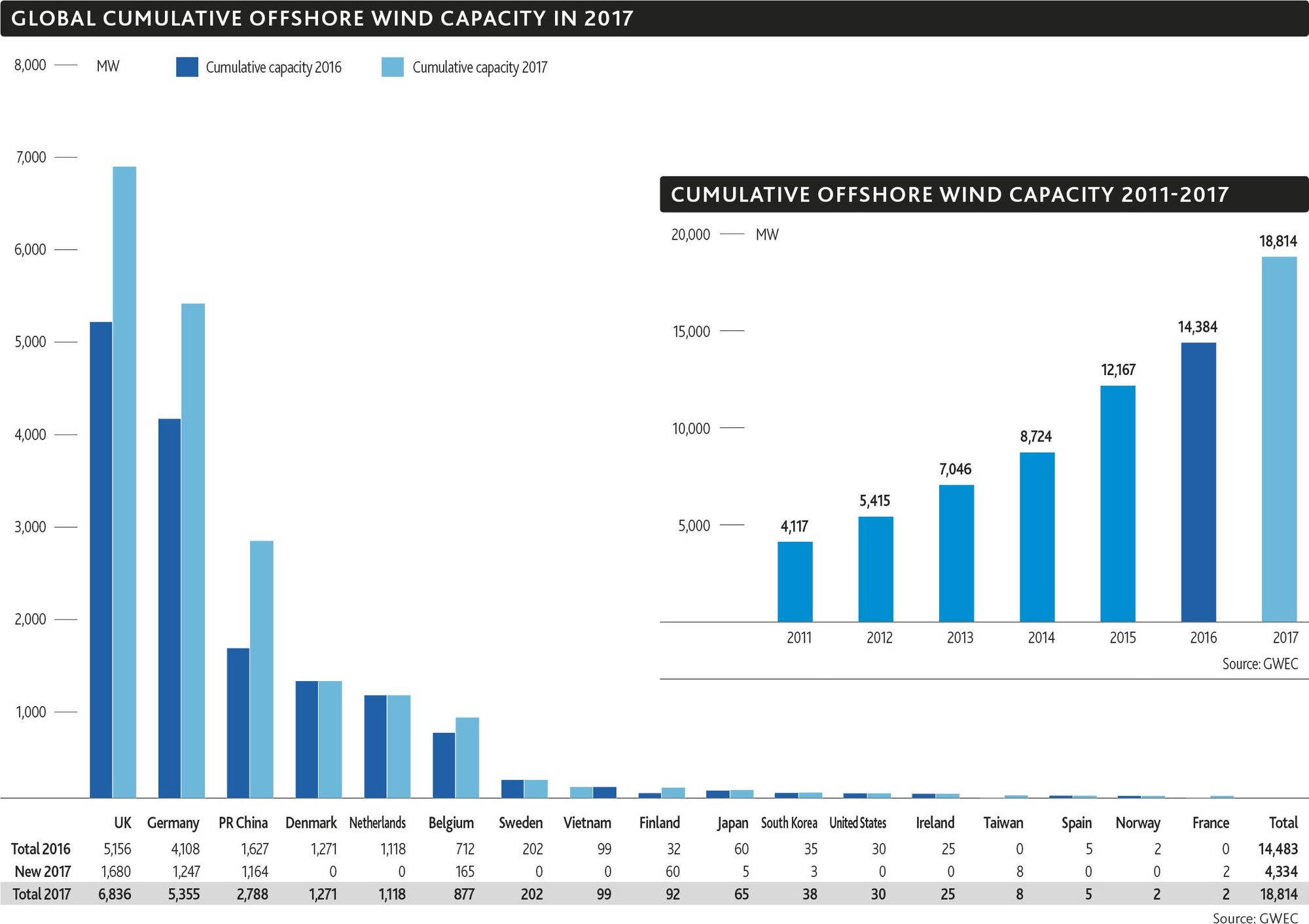